Today, more and more residents are signing up for community solar in NJ to save money and the environment. Until recently, these options were somewhat limited for most NJ residents, however, the advent of community solar has made a tremendous impact on energy production and use in the state.

Throughout this comprehensive guide, we will outline how community solar works in New Jersey and the legislation and programs that make it possible. In doing so, we hope to illustrate the bright future that community solar projects are bringing to the Garden State.

What is Community Solar in NJ?

Okay, before we dive into the details about New Jersey’s community solar, let us define what it is we are talking about here. Community solar in NJ is a relatively new concept but is quickly growing as an acceptable form of electricity production and use nationwide.

To put it simply, community solar is any solar power installation that accepts capital from and provides output credit and tax benefits to individuals and other investors. Community solar gardens can be seen throughout the state with large PV solar panel arrays harnessing the sun on roofs, fields, and properties around the world.

Community solar may be referred to by many different names, including:

In the photo below, you can see a typical New Jersey community solar farm. For more information and background on how it all works, feel free to read this guide on community solar. 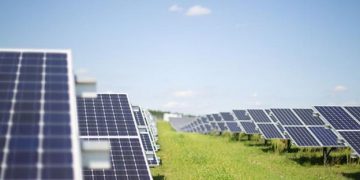 How Does Community Solar Work in New Jersey?

In New Jersey, community solar makes it possible for more people than ever to adopt clean, renewable electricity. For renters, and businesses, and homes without sufficient roof-space or sunlight, utility users can simply “switch” to community solar to ensure that their energy is coming from an environmentally friendly source. In doing so, there are also usually financial benefits of enlisting in a community solar program as well.

Today, there are essentially three roles that an individual or entity can play in the realm of community solar: the site host, developer, or program participant.

As a site host, property owners have the power to sell or lease their property to individuals and entities interested in installing and maintaining solar panels onsite. Community solar sites can be located anywhere the sun shines in the state, regardless of the area’s previous function. In fact, state solar programs heavily favor approving solar array sites that repurpose or improve the property such as landfills, condoned coal mines, and more.

Once a site is planned, a solar developer can then build the PV arrays in order to produce clean, renewable electricity. Here, individuals, co-ops, and large companies are permitted to install and maintain community solar gardens and are also responsible for marketing and signing up subscribers. In NJ, the following are some of the largest solar developers currently producing energy:

Of course, community solar won’t be able to be called “community” solar without a subscriber base. These large solar gardens are developed so that individual users and businesses will use the electricity harnessed by the solar panels to power their daily lives. It is extremely easy to get started with community solar. Interested residents in NJ can learn more about their options here.

Renting vs Owning in Community Solar in New Jersey

In New Jersey it is possible to both “rent” or “own” a part of a community solar project. In renting models, utility consumers enter into a lease agreement with an independent electricity provider that can be located anywhere in the state. Here, a monthly fee is usually required each month.

On the other hand, it is also possible to “buy” a portion of a community solar project to cover the electricity demand of your home or business. In doing so, a larger upfront investment is required, but there is generally more ROI if you intend to draw your electricity from the community solar farm for decades to come.

No matter which model you decide to choose, every contract is different, and it is important to review all of the details before entering into any kind of community solar agreement.

Although NJ has been adopting solar energy on homes and businesses for over a decade, community solar is a relatively new state incentive. Below, we will describe the exact bills and programs that have skyrocketed the development of shared solar projects in the Garden State.

On May 23, 2018 the New Jersey state legislature passed Assembly Bill 3723 unanimously in a 10-0 vote. With the advancement of this bill, the state modified its renewable energy portfolio by adding programs and modifying existing policies. Most importantly, the bill established new goals and programs related to increasing the installed megawatt capacity of solar across nearly every sector including residential, commercial, and community solar projects.

With the new Assembly Bill 3723, the state of New Jersey established the Community Solar Energy Pilot Program, which allowed utility customers to purchase their energy from community solar farms in remote locations. This is commonly known as remote net metering or virtual net metering.

With the Community Solar Energy Pilot Program, NJ began accepting applications for clean energy developers looking to start their own community solar programs in the state. In the program’s first year the board approved 45 out of 252 applicants.

On October 2, 2020, the Pilot program officially entered Program Year 2 and is now accepting new applications for new solar development. This time around, NJ plans to double the allotted capacity and install 150 MW of new solar energy. Accepted community solar projects have must follow a fairly loose set of guidelines which is as follows:

To put things into perspective, we will now look at how the Garden State stands when compared to solar energy adoption across the country.

Overall, New Jersey ranks 7th in the country in total solar PV capacity installed, which is great as the state is the 11th most populated. This has increased considerably over the past several years, as a look at this graph, illustrates the state’s not-so-distant past. In 2017, only 3.7% of the state’s electricity was produced by solar. After A2723 was passed and more capacity has been adapted, solar now accounts for over 5% of the state’s electricity generation. 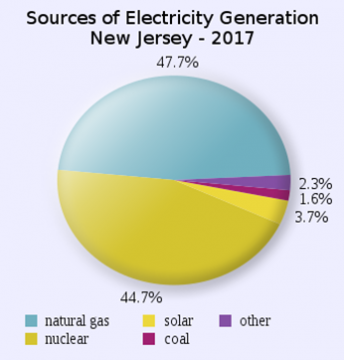 In addition to community solar projects, a lot of this increased capacity has to do with residential, commercial, and government solar development. In the picture below from Wikimedia Commons, you can see a street light that runs on solar energy on a street in New Jersey. Here, NJ’s governmental adoption and private incentives have been increasing right alongside their community solar initiatives, allowing the state to hold such a high national ranking. 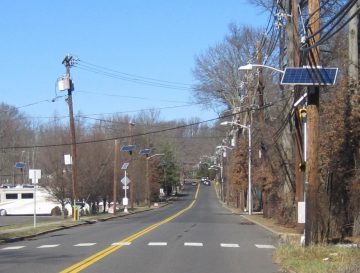 So, although the ball has only been rolling for a few years, New Jersey’s rapid adoption of community solar projects actually make it one of the best states in the country for shared solar infrastructure. Whereas states like Colorado, California, Massachusetts, and Minnesota have a bit of a head start, NJ’s Community Solar Energy Pilot Program installed 85 MW of capacity in the first year.

This has quickly given NJ a solid, top-ten ranking in terms of community solar installed and planned. As the program enters into its second year, many analysts believe that NJ will likely reach its clean energy goals with community solar playing a large part in the process.

We hope that this guide has helped clear up many of the details of New Jersey’s current community solar programs. For a few quick bits of information, here are some of the most frequently asked questions about shared solar in the Garden State.

Who can use community solar in New Jersey?

Both residential customers and commercial businesses can subscribe to community solar projects in New Jersey. In doing so, energy consumers can expect reduced rates from clean energy sources without having to change anything in the home or building’s electrical system.

Can I receive tax credits with community solar in New Jersey?